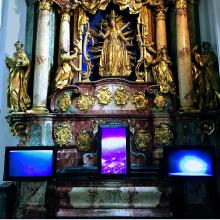 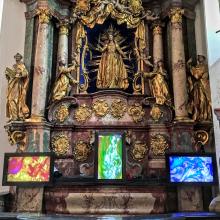 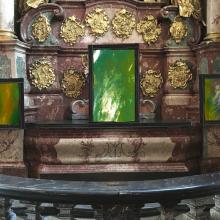 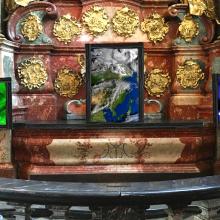 SALVE REGINA is an artistic invitation to experience one’s own connection to a universal whole – in all its power and all its fragility. Satellite images provided the impulse for an interdisciplinary project that merges science, art, poetry and spirituality to make the majestic beauty of creation sensually perceptible.

The rich and impressive photography, made available to the public by NASA (National Aeronautics and Space Administration) and its myriade subsidiari- es such as SDO (Solar Dynamics Observatory), NOAA (National Oceanic and Atmospheric Administration) and EOSDIS (Earth Observing System Data and Information System) as well as Pergolesis ́ music inspired the Canadian artist Henry Jesionka to initiate an extraordinary project. As a preliminary work he developed together with the composer and sound designer Bruno Degazio (Toronto, CAN) a video sound installation for three monitors as an extension of the stone Altar of Our Lady in St. Andrä church in Graz – a cinematic triptych. SALVE REGINA for Soprano, Organ and Pre-recorded Tape, is a trope on the second movement of Pergolesi’s traditional setting of the well-known Marian prayer for soprano and strings from 1736. Using special software, a recorded performance of Pergolesi’s work was time- stretched by a factor of eight, bringing the 3.5 minute movement to a length of 28 minutes. This time-stretching creates an impression of superhuman stamina of the recorded singer, giving her a goddess-like quality relative to the live performer. The live performer by contrast represents suffering humanity pleading with the goddess for relief from this vale of tears. Into this other-worldly background new material for soprano, organ and string orchestra was composed, which comments on, modernizes and replaces cer-tain sections of Pergolesi’s composition. Some of the new material paraphrases the plainchant SALVE REGINA, composed in the 11th century by the hunchback monk Hermannus Contractus of Reichanau. Other material is derived from genres of cinema music and from modernist compositional techniques such as used by the Hungarian composer Gyorgi Ligeti.